This is the third article about my impressions on the 2.0beta 1 version of Thunderbird.

None of the major categories for Preferences changed. However, the options inside these preferences have made some changes; some good, some bad.

• They added the sound notification option as a part of the main area, rather than a form reached by hitting a button. The function for sound notifiction still needs a tweak or two (at least on the Mac it does), but I know lots of people use this and its nice that they’ve moved out from the shadows. My favorite is still the Holy Grail quote “Message for you, Sir!”

• There is a new Tags subtab under Display that allows you add, edit, and delete your tags. I was wondering where you’d do that exactly.

• There are quite a few other changes, but I’ll hit those in detail once the final release comes out, since these might be changed by then anyway… 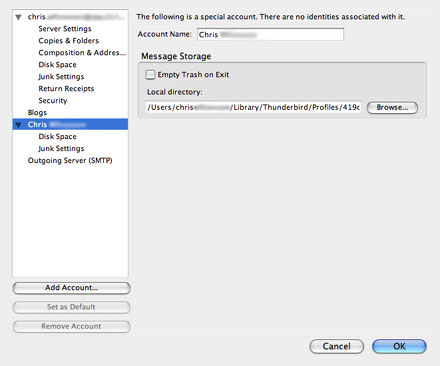 So not all the Junk Mail Controls moved into the preferences. Anything dealing with specfic accounts was moved into Account Settings. There is a new section called Junk Settings that has most of the settings for Junk Mail Controls here. Minor change, but better than having a separate place for them. Other than that, there aren’t any major changes here.

This entry was posted on Monday, December 18th, 2006 at 3:24 pm and is filed under General, Mozilla News. You can follow any responses to this entry through the RSS 2.0 feed. You can leave a response, or trackback from your own site.

This site uses Akismet to reduce spam. Learn how your comment data is processed.