I’m hoping there will be many impressive improvements already added to the app that will make my user’s lives a little easier. FYI: I backed up my mail folder, just in case this thing decides to take dump on me… Here we go:

The icon is the same, no changes there, and it installs the same (at least on a Mac), so cool.

It did check out my add-ons for compatibility and disabled three of them: MoreCols, Contacts Sidebar, & Thunderbird Message Filter Import/Export. Apparently, these don’t have official support for 2.0 yet, althought Lightning & Foxytunes were left alone so we have some add-on developers that are ahead of the game. 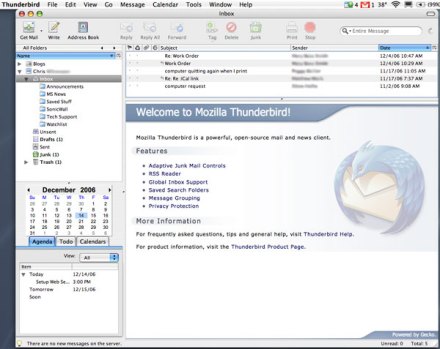 With the app open now, I don’t really notice any major changes. It looks a little more like Apple’s Mail, but not by much. Maybe this will change a little more once the final release comes along.

I did notice the new Tags button, and eventually, the new Folder Views bar. I’ll write in more detail about those later.

I couldn’t get the Folder Summary Popups or the New Mail Notifications to work for me. Since its a developer release, I won’t gripe too much, but those would have been nice to see in action.

Overall, I’m digging where it’s going. There are certain things that I would love to see changed or added at a much faster pace, but I understand that quick development and good quality product don’t necessarily go together. More reviews are coming…

So I’ve been waiting for some news on Thunderbird 2.0 ever since Firefox 2 was released. Well, here is the first beta release and it looks like it was well worth the wait! Here’s the short list of changes:

There are plenty of things I can think of that I hope are included in the 2.0 version…like improved filtering…but I digress.  I’m going to play with the beta tomorrow and I’ll post some screen shots and reviews then.